The British Crystallographic Association is the main UK organisation supporting the science of crystallography in all its forms. Every year, its Biological Structures Group holds a meeting in the run-up to Christmas to discuss and celebrate recent developments in structural biology research. In 2012, this Winter Meeting was held at the MRC Laboratory of Molecular Biology at the University of Cambridge.

The LMB, as it is usually known, is one of the birthplaces of modern structural and molecular biology. It moved into its current building in 1962, the year when four of its most famous scientists were awarded two Nobel Prizes for some of the most important discoveries in twentieth-century biology: James Watson and Francis Crick or the structure of DNA, and Max Perutz and John Kendrew for the very first three-dimensional structures of proteins (myoglobin and haemoglobin, respectively).

It was appropriate, therefore, that the theme of this year's Winter Meeting was "From Genome to Proteome". The basic molecular processes that underlie all of life - DNA replication, transcription of DNA into RNA and translation of RNA into protein - are all, now, quite well understood. These processes are all very complicated and require numerous proteins, many of which interact together to form complexes and "molecular machines" that are quite large, at least in molecular terms. Scientists presenting at the meeting discussed recent, innovative studies of the structures of many of these proteins and the nucleic acids that they interact with. Many of these processes will be discussed in some detail in section 8 of the PPS course, "The Protein Lifecycle".

The meeting programme was divided into three sections, corresponding respectively to DNA synthesis and repair, RNA transcription and protein translation.

DNA synthesis and repair are not even mentioned in the famous Central Dogma of Molecular Biology (put very simplistically, DNA makes RNA makes protein) but they are, of course, essential for it. The first speaker in this session, and therefore in the meeting as a whole, was Luca Pellegrini from the University of Cambridge. He described structural studies of the first part of this process: the initiation of DNA synthesis. In all organisms, this process involves an enzyme called primase, which is found at the DNA replication fork - the point at which the strands of the original DNA helix divide so that a new strand can be synthesised on each of the template strands. Pellegrini and his group have solved the structure of several of the subunits of yeast primase, alone and bound to part of the DNA polymerase Pol alpha, and are using these structures to deduce the precise mechanism of this vitally important process.

Then Neil Kad of the University of Essex described the techniques he has developed for visualising individual molecules, and how he is applying them to the study of DNA repair by nucleotide excision. Briefly, this technique involves stretching a single molecule of DNA between two positively charged silica beads, and tagging individual molecules of DNA-binding proteins using fluorescent quantum dots so that their binding to and progress along this DNA "tightrope" can be monitored. He has discovered that although single subunits of the Uvr DNA repair protein complex may bind DNA and search it for errors, a complex between the subunits UvrA and UvrB is required for quick and efficient searching. 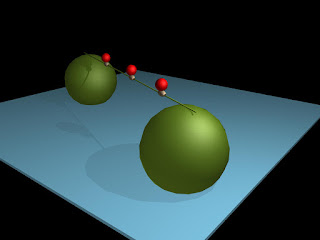 The spliceosome is a "molecular machine" comprised of protein and small nuclear RNA (snRNA) subunits that found only in eukaryotes and that catalyses the removal of introns from the messenger RNA precursor molecules that are initially transcribed from DNA. Chris Oubridge, a member of Kiyoshi Nagai's group at the MRC Laboratory of Molecular Biology in Cambridge (and therefore one of the "home team") described an atomic resolution structure of a complex known as U1 that forms a major part of the soliceosome. This "small nuclear ribonucleoprotein" (snRNP) comprises the snRNA molecule U1 bound to ten proteins. This technically challenging exercise in X-ray crystallography is yielding important insights into the function and mechanism of this important part of the spliceosome.

Structure of the U1 ribonucleoprotein, from Kiyoshi Nagai's web pages at the MRC-LMB.

Another interesting presentation in the Translation section was given by David Lilley from the University of Dundee, who described the structures of kink turns in RNA molecules, and how these structural motifs interact with proteins.

Since the modern Laboratory o Molecular Biology was constituted as the "Unit for Research on the Molecular Structure of Biological Systems'" in 1947, nine Nobel prizes have been awarded to scientists working there. Its most recent laureate, Venki Ramakrishnan, shared the 2009 chemistry prize with Tom Steitz from the US and Ada Yonath from Israel for determining the first atomic resolution structure of the ribosome. Israel Sanchez from Ramakrishnan's lab at the LMB gave a presentation on the mechanism by which stop codons, which give the signal to terminate protein synthesis, are decoded on the ribosome. This process, which occurs when one of the stop codons (UAA, UAG and UGA in the standard genetic code) binds to the ribosomal A site, is still less well understood than the process through which "sense" codons are decoded into amino acids. Sanchez and his colleagues are studying the structure and function of ribosomes bound to modified RNA in which the uridine in the first position of a stop codon has been substituted by pseudo-uridine. They have discovered that the decoding centre of the ribosome is more flexible than they had originally thought, an insight that may help the understanding of the termination of protein synthesis further.

The final speaker was Birkbeck's own Cara Vaughan. She discussed some of her recent research using a combination of X-ray crystallography and electron microscopy to decipher the assembly of the kinetochore. This is a structure that forms in eukaryotic cells during cell division and that links the dividing chromosome to the mitotic spindle. Vaughan's research concerns a protein called Hsp90 that activates many signalling proteins. This protein is a member of a class of proteins termed the chaperones, which are generically involved in the folding, unfolding and activation of other proteins. Vaughan and her co-workers have solved the structure of two interacting proteins found in yeast, Sgt1 and Skp1, which togethe3r seem to hold Hsp90 in an open conformation that enables other kinetochore proteins to bind. 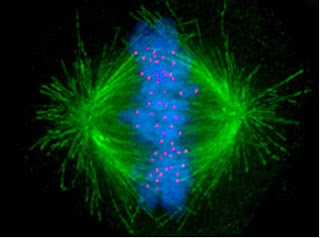 Image of a dividing eukaryotic cell. The chromosomes are shown in blue, the microtubules of the mitotic spindle in green, and the kinetochores in pink. Image from Wikimedia Commons.

The annual Winter Meeting is the most high profile event organised by the Biological Structures Group of BCA. The association as a whole organises many other events, including, this year, the annual European Crystallographic Meeting. ECM 28 will be held at the University of Warwick from 25-29 August 2013; it will provide an opportunity for British and European crystallographers to celebrate the origin of their science with the discovery of X-ray diffraction by father and son William Henry and William Lawrence Bragg, almost exactly a hundred years ago.