The London Structural Biology Club (LSBC) is a network for students and researchers working in all aspects of structural molecular biology and based in London and the south-east of England. Once a term, members get together for an afternoon of research talks and discussion followed by refreshments (generally featuring pizza and beer). These meetings are often held at Birkbeck, and we have featured them on the PPS blog before (see this post from 2008 and this one from 2012).

The LSBC meeting for the summer term of 2016 was also held at Birkbeck, and hosted and chaired by Alfonso de Simone, a lecturer in NMR spectroscopy at Imperial College London. One of the four talks was given by Thomas Meier, also from Imperial College. Meier, who has worked at ETH Zurich, Switzerland, and the Max Planck Institute of Biophysics in Frankfurt, Germany, was appointed to a chair of structural biology at Imperial just over a year ago. His research concerns the structure and function of a tiny, complex ‘molecular machine’, ATP synthase (the link is to our page on that enzyme in section 10 of the PPS course). This enzyme is a ‘rotary ATP synthase’, catalysing the conversion of the electrochemical energy of ion transfer across the cell membrane into chemical energy stored in ATP. Meier and his group have solved the complete structure of this multi-subunit enzyme complex using a combination of X-ray crystallography and electron microscopy, and shed light on its role as a target for a novel class of drugs against tuberculosis.

ATP synthase is a highly dynamic enzyme complex, which makes it particularly difficult to study structurally. The complete enzyme comprises two motor sub-complexes; most of one, termed Fo, is embedded in the membrane and the other, F1, is in the matrix. They are tightly coupled with each other and linked by subunits forming an outer stalk and an inner, central stalk. From a functional point of view, the ATP synthase consists of a rotor and stator part, both sharing subunits from the F1 and the Fo sectors. The motors are driven either by the proton (or sometimes Na+) motive force to form ATP, or in opposite direction by the hydrolysis of ATP to pump ions across the membrane. Similar enzymes are found in the inner membranes of bacteria and mitochondria and in the thylakoid membranes of chloroplasts.

John Walker of the MRC Laboratory of Molecular Biology in Cambridge was awarded a share of the 1997 Nobel Prize in Chemistry for determining the structure of the bovine F1 motor using X-ray crystallography (e.g. PDB 1E79). This subcomplex consists of five different types of subunits; three pairs of similar alpha and beta subunits are arranged alternately around the rotor (gamma / delta / epsilon subunits), which harbours an asymmetric coiled coil domain in the gamma subunit. The nucleotides ADP and ATP can bind to the interfaces between the beta and alpha subunits; the central gamma subunit rotates in 120o steps, causing conformational changes that in turn change the affinity of the three catalytic sites for the nucleotides. Rotation in one direction, driven by the energy of ion transfer across the membrane, leads to synthesis of ATP from ADP and phosphorus (Pi); rotation in the other direction will hydrolyse ATP back into ADP and Pi, thus releasing the energy required to pump ions.

The membrane-embedded Fo motor consists of the rotor part, a ring of identical c-subunits termed the c-ring and the stator part, a single-chain a-subunit that grants access and release pathways for ions. Each c-ring subunit is a helical hairpin with its N and C termini on the cytoplasmic side; the number of subunits is constant within a species but varies between species, as far as we know today, between 8 and 15 c-subunits. Meier’s group has solved the structures of a number of c-rings from different species of bacteria, helping to elucidate the rotor’s mechanism of action; essentially, protons (or in some cases Na+ ions) can reach one of the c-ring subunits by an ion pathway mediated by the stator a-subunit, where they lock to a free ion binding site on the c-ring, rotate with the c-ring for almost a complete 360o turn to reach the second release pathway that leads to the other side of the membrane. The ion translocation causes rotation of the Fo ring and with it the complete central stalk that protrudes the F1 headpiece. 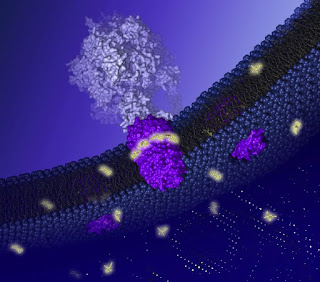 Artist's impression of an ATP synthase molecule embedded in a membrane. Image © Laura Preiss, Max Planck Institute of Biophysics, Frankfurt, Germany
Until recently, ATP synthase has not been thought of as a drug target, principally because the structures and mechanisms of the bacterial and human enzymes are so similar. Now, however, it has emerged that it is the target for bedaquiline, the first novel drug to be approved for treating tuberculosis (TB) for over 40 years. And new drugs for TB are needed very badly: in 2015, over 9 million people contracted this disease and about 1.5 million died from it. Tens of thousands of TB cases each year are multidrug resistant (MDR) or even of the extremely drug resistant (XDR) variant for which no other clinically approved antibiotic is available anymore. Bedaquiline, however, is effective against both, MDR- and XDR-TB strains.

Functional analysis has shown that bedaquiline, which is a diarylquinoline, acts by binding to and halting the rotation of the Fo rotor. Meier and his co-workers have now solved the structure of the drug bound to the c-ring from a similar, non-pathogenic bacterial species, Mycobacterium phlei. This structure has nine c-subunits and shares over 80% sequence identity with the M. tuberculosis c-subunit variant (100% match at and around the drug binding surface). The crystal structure (PDB 4V1F; Preiss et al. (2015)) shows the drug occupying the proton-binding site on each of the nine subunits and thus preventing proton transfer. This stalls the rotation of the Fo motor, preventing rotation and thus the synthesis of ATP in F1. Small differences between the structures of the proton-binding sites account for the exquisite specificity of bedaquiline for the Fo rings of mycobacteria and thus for its efficacy and safety as an anti-tubercular drug.

Meier ended his talk by explaining that TB-causing bacteria will eventually – perhaps sooner rather than later – develop resistance to bedaquiline, just as they have to every previous drug that has entered the clinic. There is therefore a pressing need to develop further drugs that act at the same target, and his group’s structural studies are proving useful in the search for bedaquiline analogues.

The London Structural Biology Club has a public Facebook group, which can be found here.